As part of her role as one of Build Africa’s Patron’s, the actress Tamzin Merchant recently visited Kaikuku School in Masindi, Uganda.

In her own words, Tamzin tells the story of her visit to a most unusual school and how she was inspired by the children of a world far removed from her own.

We’re four hours out of Kampala when we leave the tarmac and it’s the red Masindi clay roads we’re driving on. I say ‘roads’ but they are really more like rain-ravined ribbons of earth snaking between the high fields of sugarcane and brittle blocks of maize. Fred is behind the wheel, urging the Jeep up and down, negotiating mini-craters and crossing mini-canyons as we buck and lurch up the road. Fred is doing an excellent job: if I was driving we’d be in a ditch by now.

We’ve passed miles and miles of lush greenery, abundant with plants I don’t recognize. We’ve driven through towns that cling to the road in bright tumble-down clusters, we’ve inspected various articles of food on offer from vendors at the Jeep windows, we’ve wondered at wayside women balancing burly baskets on their heads. So far, we’ve been watching Uganda pass by from the windows of our Jeep. But now we’ve arrived. 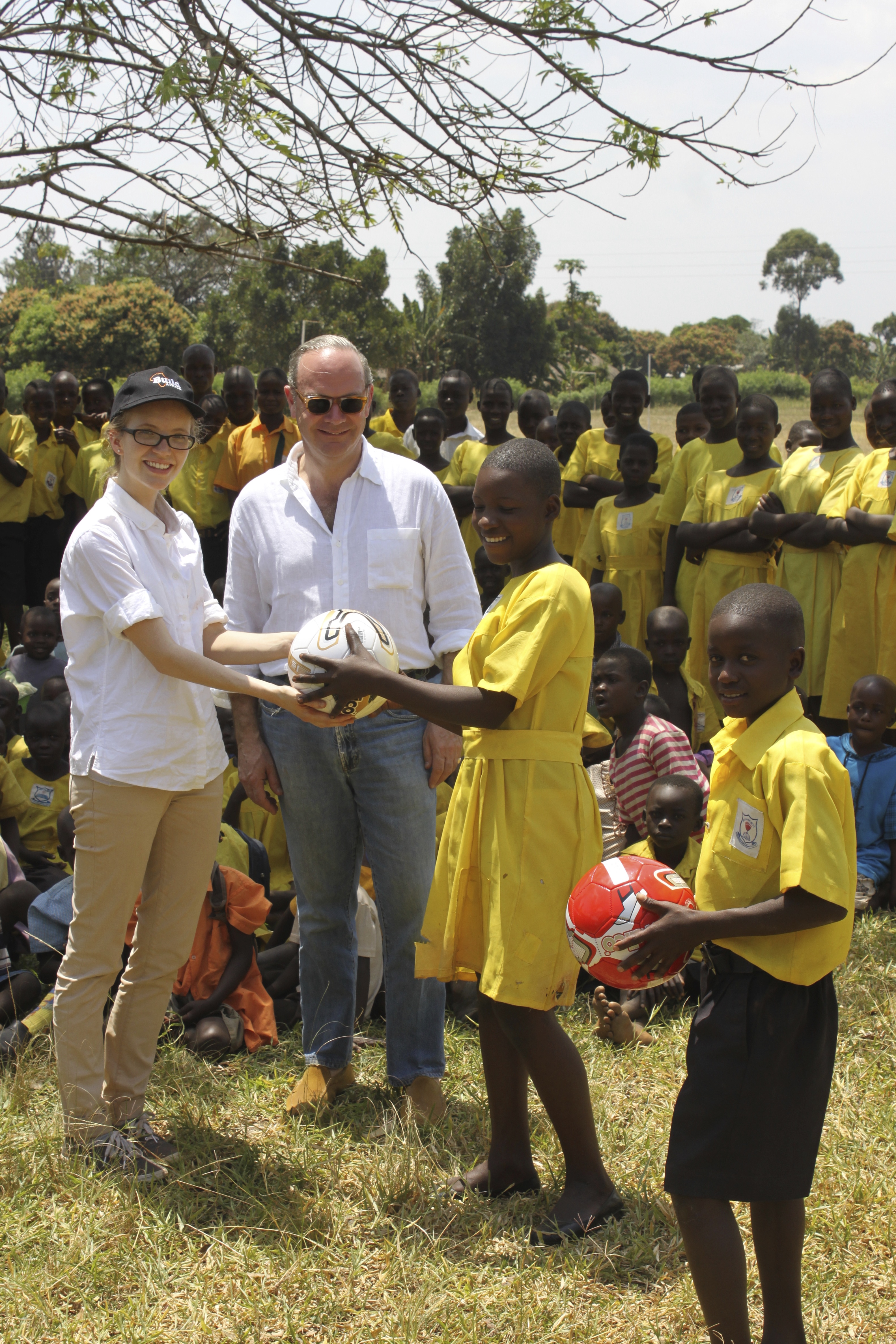 “This is it: the first school,” says Mark (Build Africa Chair of Patrons & Ambassadors, Mark Florman), as the Jeep pulls into a large patch of scrub land hemmed with scraggly bushes. I look around for the school but I can’t see it. All I can see is an incongruous old desk and a slightly lopsided umbrella standing like a mirage in the sun a few dozen feet away. We jump out of the Jeep and the African heat immediately fills every sense. “Where is it?” I ask, trying to discern a building somewhere in the dense shrubbery. Mark smiles; he’s been out here many times before, I imagine he’s used to the perplexed look I must be wearing on my face as I start to comprehend just how huge a task Build Africa has taken on, “You’re standing right in the middle of it.”

So this is the school: this field of scrubby grass, this clearing in the middle of the wide, wild African bush. This is where children come to learn. In the corner of the ‘school’, under the shade of a dark-leaved bush, is the welcome party: a solemn congregation of teachers and parents, presided over by the Headmaster (whose office we had parked near - the desk and umbrella). We are graciously welcomed and after hearing the Headmaster speak (through Happy, who was translating for us), we are offered a tour of the school. I feel like we must have seen much of it already (most of it being the field that we are currently sitting on the edge of) but we follow the Headmaster as he leads us past his ‘office’ and up to the edge of a thick shrubbery. 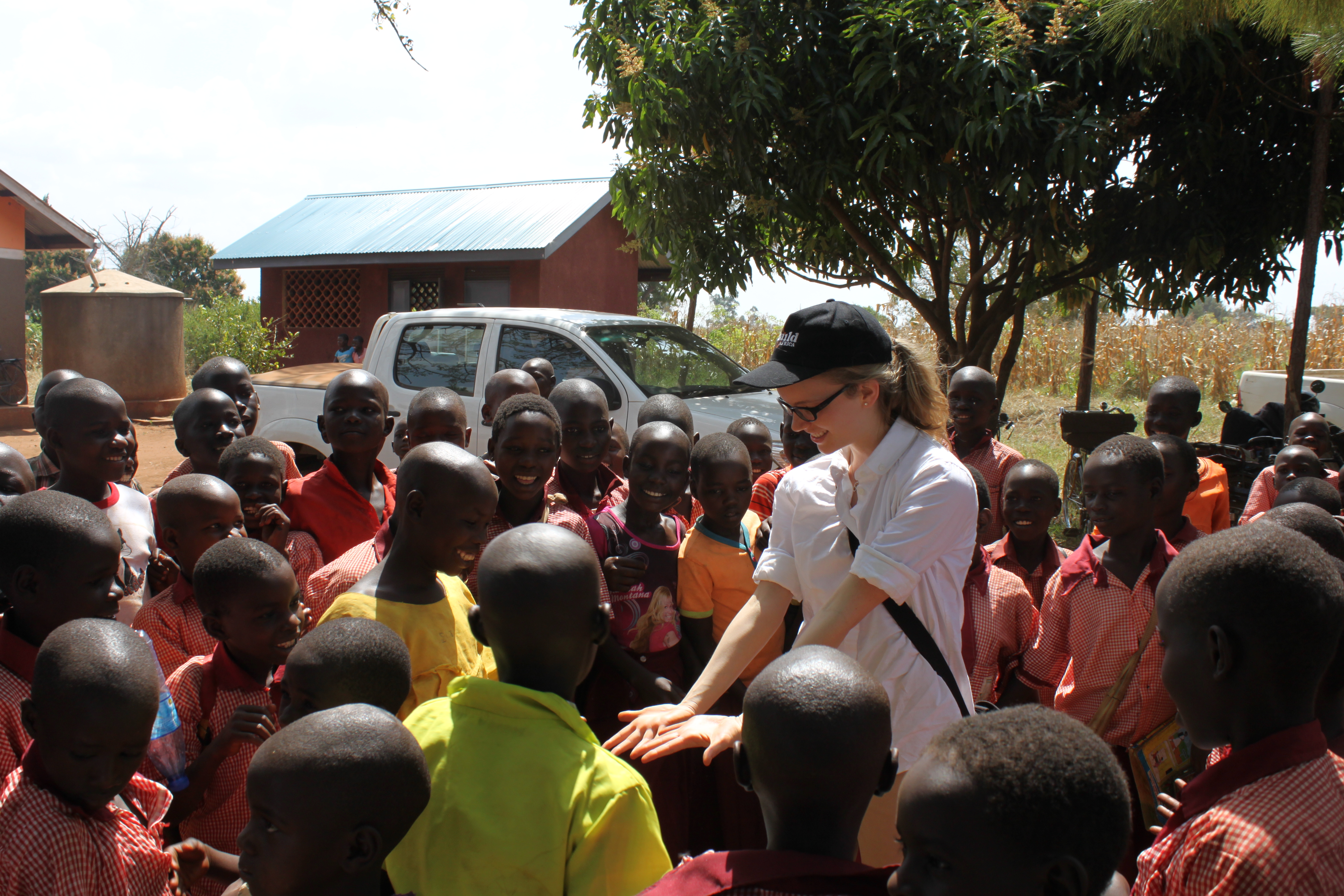 Then I hear the sound of children chanting in reply to a teacher. “A chicken is a domestic animal, a cow is a domestic animal, a goat is a domestic animal... “ It is coming from inside the shrubbery. We duck past a low-hanging branch and we’re in a classroom. It’s like no other classroom I’ve ever been in before. It has a canopy of leaves for a ceiling, for a start, and no walls except the thick tangled undergrowth. But there are two benches, several rows of children and a teacher standing at the front, pointing at a blackboard with chalk drawings of various animals on it. Although a contingent of mazunga (white people!) visiting their classroom must be rather distracting for the pupils, they continue to concentrate on their lesson, diligently repeating the names of domestic animals back to the teacher as he points to the pictures.

This is dedication, this is determination, this is devotion. Build Africa has found passionate, committed people out here, further away from the world I know than I have ever been. And right now, as I watch these children, their concentration and determination described so clearly on their young faces... right now I am utterly resolved to do everything I can to make sure these children receive the education that their perseverance through this poverty proves they deserve.