Since 2001 he’s run over 30 marathons for Build Africa, raising an incredible £65,000 for our work in Kenya and Uganda. He’s continued running despite a heart attack, and has even brought his family in on the fundraising action – recently completing the epic 100km Race To The Stones trail ultramarathon with his son, Matt.

We spoke to Richard during some much needed downtime...

The race was gruelling; the hardest I’ve ever done. I have run four ultramarathons before but all of them on-road. This was the first off-road, and on some hard and rocky trails. For the last 3 hours it was in darkness so it became even more treacherous. It was also a very hot day (for England anyway) and so that was energy-sapping.

It sounds tough! How much training did you have to put in?

I run over 30km a week for any event, but this year I have also done a lot more trail runs to get used to the rough terrain. In the last three months I’ve ran two trail marathons in training and the Big Black Mountain Challenge, which is a 50km hill race in the Brecon Beacons.

You took on the challenge with your son, Matt. It must make great father/son bonding?

We’re a good team and are very supportive to each other. For example when it got dark it was a real strain on our concentration not to stumble or turn an ankle on the trails. So, we took it in turns to take the lead, with the leader calling back warnings to the other behind. That way we could share the mental burden.

We both crossed the line arm-in-arm and were rather emotional at the finish. I am a very lucky and proud Dad to have such a wonderful son, and it was an honour and a privilege to complete the challenge with him. 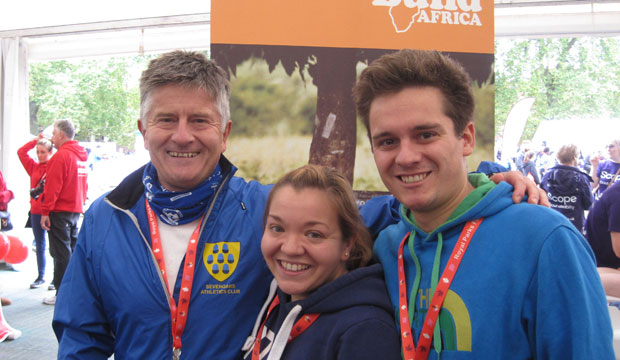 Do you hope your children will follow in your fundraising footsteps?

So what's been your proudest moment with Build Africa?

This Race To The Stones event was definitely my toughest challenge, but my proudest achievement was opening a new school for Build Africa at Nyakibete in Masindi, Uganda. The school was entirely funded by the Build Africa marathon teams who ran the London and New York Marathons in 2004. I had the honour of representing the runners at the opening ceremony in March 2005. I was blown-away by the experience and it made me all the more determined to run for Build Africa and raise more funds for their cause.

Is that what keeps you fundraising for Build Africa, or motiviating you during a long race?

The Nyakibete visit, and the thought of how my fundraising can help children in some of the poorest communities in Africa is a huge motivating force and often when I’m on my last legs in a race it’s that thought that gives me the strength to keep running and finish the distance.

Build Africa is special to me as it punches above its weight for a relatively small charity, and achieves so much with so little.

That’s amazing, Richard. So, what challenges do you have planned next?

I now need to spend some relaxing time with my wife, Alyson, who has always been so supportive of my running and has never complained about all the time it keeps us apart. I’m now 58 and only two years ago had a heart attack, so I have to be more realistic about the challenges I set myself nowadays. That said, watch this space, I’m sure I’ll think of something new for next year! 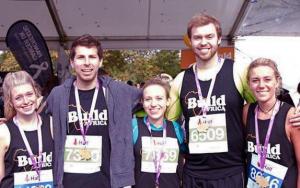 Take part in an event 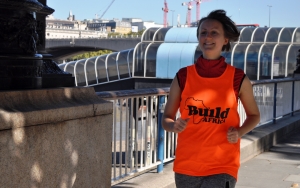