Keeping up with Katharine

Katharine at the end of Tough Mudder in 2013

Katharine – Build Africa’s Community & Events Officer – is pretty passionate about fitness and endurance sports. She's just completed her 6th marathon, and is a qualified personal trainer! We decided we needed to find out more...

How did you first get into long distance running? 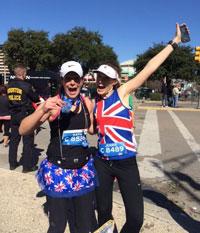 I first got into marathon running with my brother. We grew up in London and the London Marathon is such an iconic race, so we thought we’d give it a go.  It was a random decision and I didn't do much preparation for it: I had age on my side then! I was just finishing my first year of university – which isn’t the best year for health and fitness – but we made it to the start line. It was a long day but I really enjoyed it; I had a quick chat with my parents on Tower Bridge, and was overtaken by a Womble, but there’s no beating the atmosphere in London.

What was the first challenge you took on?

My family moved to Jersey in the late 90s and I chose swimming as one of my PE GCSE sports. I joined the local open water swimming club which opened my eyes to endurance sports and the passion driving the people doing them. In 2002 I completed a 41 mile solo swim around Jersey. It was a battle of willpower, self-belief and endurance. Little did I know that the latter is a minor element in endurance sports!

How do you motivate yourself through the really tough bits?

This is a hard question to answer: why do we challenge ourselves through hideous events that put our mind and body through hell and back? I'm not sure any endurance athlete would be able to give you a straight answer. I do it because I love a challenge, I like keeping in shape, and it helps to have a focus outside of work to keep a good work/life balance. It feels great when you're headlong into training and you ache after workouts. The moment you have completed what you've been training for is bliss.

What advice would you give to someone who wants to take on an endurance challenge but isn’t fully convinced?

My advice is to get out there and give it a go. Build up slowly to avoid injury, vary your training so you don't get bored and research local groups so you don't go it all alone. If you don't like what you’re doing, stop and have a go at something else. Above all, get off your butt and give it a try.

Do you prefer to run alone or in a group?

I think a bit of both is a good mix. I tend to run alone during the week as I can fit shorter routes in around work, but I join the local running club at the weekend for their longer runs and having company is vital. There’s nothing worse than heading out for a 3 hour run on your own, especially in winter!

What are you working towards at the moment?

I ran the Houston Marathon with a friend a couple of weeks ago, and now I’m taking some time out. My next challenge is the Royal Parks Foundation Ultra Marathon (31 miles) in October. I'll be working on general fitness and core strength for the next few months then start building up the mileage again.

What is your dream event, the one event that you’d love to join?

The Marathon de Sables: 5 marathons in 5 days across the Sahara Desert, carrying your own kit and water. It's seriously tough and it's probably a good thing there is a waiting list and a whopping registration fee as I definitely would have entered it by now!

If you want to take part in a challenge for Build Africa, you’ll be in safe hands with Katharine. She’s a qualified Personal Trainer, and will be with you every step of the way from registration to finish line.