The impact of early learning

Our three-year EQUAL project, helping children in Western Uganda access quality early years education, was due to end in July 2017.

However, after some initial challenges and delays at the start of the project, we extended work until the end of the year to ensure we delivered our commitment to children and teachers.

The original project aimed to give teachers at 20 schools the skills and resources to engage younger and more vulnerable learners, as well as create a strong support network of parents and older children to counter high drop-out rates. This was to ensure the children were receiving the best possible education during their crucial fi rst few years of school, setting them up for a successful journey through education and into adulthood. 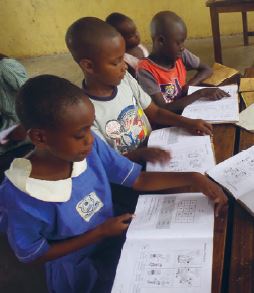 A key part of EQUAL was to supply age-appropriate books and resources to each school, helping to open up education for young learners and improve literacy rates.

Each of the 20 schools was supplied with three specially-created mini libraries (one for each early years class); including a total of 2,514 books. This reduced the student to book ratio from a shocking 7:1 in 2014 to a more manageable 3:1, meaning more children now have a book to learn from.

With the arrival of the new textbooks, resources and stories, Build Africa fi eld staff have reported increased engagement and enthusiasm from children.