The Build Africa Ball raises £250,000 for girls’ education in Kenya

The stunning event was held at London’s exclusive One Marylebone, and attended by almost 200 guests including Downton Abbey star Penelope Wilton OBE, and actress Tamzin Merchant – both patrons of Build Africa.

The ball was hosted by Channel 4 News anchor Cathy Newman and featured performances from leading African dance company Ballet Nimba, as well as Kenyan singer-songwriter Suzanna Owiyo – who recently performed for US President Barack Obama during his state visit to Kenya. 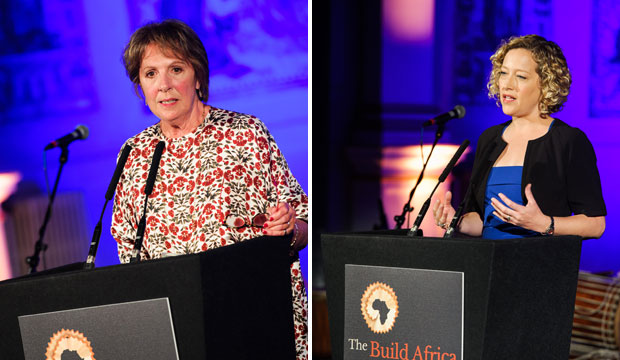 Penelope Wilton and Cathy Newman speak to the ball guests

This year’s ball was held in support of Build Africa’s work with over 26,000 vulnerable and disadvantaged girls in Kwale, one of the most deprived regions of Kenya. This is an area where many young women and girls face unimaginable obstacles of discrimination, child marriage and abuse. Most girls drop out of school, thereby losing the opportunity for a better life.

Guests were invited to take part in a live auction, with prizes ranging from tickets to the 2016 Singapore F1 Grand Prix to a luxury escape in the French Alps, before the night climaxed with a dramatic final pledge by the crowd to support desperate young girls in Kenya: to give them the education they are entitled to, and the opportunities they need.

The night also showcased our new short film on girls’ education, Time Machine, produced by 3AngryMen. The emotional video tells the story of a Kenyan mother’s traumatic experiences of child marriage and sexual abuse as a child, as well as her hopes for her own daughter’s future.

Last night’s incredible total will go towards helping stories such as this become a thing of the past.

We’d like to extend our gratitude to our sponsors Solutus Advisors and FI Real Estate Management for their support during what has been our most memorable ball yet, and wish to thank everyone involved for an unforgettable night that will help transform thousands of lives in Africa.

The Kwale Girls Project is supported by: