Back in school and back on track

Nzara is in year six at a primary school in Kwale County, Kenya. Her dream is to go all the way to secondary school and become a teacher, “so that I can ensure that my younger sister completes her education and does not get married early.”

“I left school in 2012 after my father who was supporting my education became ill and passed on. My mother was left behind with six girls to take care of and it was difficult for her to support the three of us who were in school.

When my father passed on my immediate older sister got married and she joined my other sisters in married life. I think it was because she saw no hope in continuing with education and my mother accepted the dowry. I almost gave up on education, since I would be frequently sent home to collect school fees and eventually had to drop out.

When I dropped out I would take care of my younger sister, while my mother went out to look for casual labour for our survival. Sometimes I would accompany her to work and we would work in peoples’ gardens, fetch water and cut firewood for them.”

Build Africa is helping girls with stories just like Nzara’s.

Terry Kunina is a Build Africa Project Officer working in the Kwale District of Kenya: “We are identifying young mothers who are out of school, looking at the community holistically and addressing the issues that affect girls’ education.

We work with girls like Nzara to ensure that they are aware of their rights and we also aim to get community members like her parents to embrace education as a child right issue.”

I am also a member of the Girls Club, which is encouraging us to stay at school and avoid early pregnancies, which are a cause of school drop-out. Since I came back to school last year I am struggling to catch up but I am determined to get back to my top position.”

The story of Build Africa 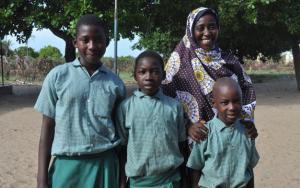